This gateway to Alaska was named the “Gathering Place” by local first nations people and you will be glad you came to explore one of Canada’s most stunning harbourfront communities. The unique setting between majestic mountains and sparkling ocean, and the magnificent scenery that surrounds it will make a distinct and lasting impression on you.

Nanaimo, BC, is located on the east coast of Vancouver Island, just 34 nautical miles across the Strait of Georgia from Vancouver, 85 nm north of Victoria, and 170 nm north of Seattle, Washington.  BC Ferry terminals in Departure Bay and Duke Point link Nanaimo directly to the Vancouver metro area, and smaller ferries offer service to and from several smaller islands. Nanaimo Airport provides multiple flights per day with direct access to the US and the mainland.

Vancouver Island is the largest North American island in the Pacific Ocean, stretching approximately 500km northwest to southeast, and 200 km east to west, with 3440 km of spectacular coastline. The island is home to more than 750,000 residents, and covers 32,261 square kilometres.

The Port of Nanaimo is one of 18 Canadian Ports and demonstrates its’ commitment to the cruise industry by having built a $24 million, state of the art Welcome Centre. The centre opened on May 6, 2011 and welcomed guests from Princess, Norwegian and Celebrity, Royal Caribbean, Silver Seas, Crystal cruise lines as well as several smaller pocket cruisers. This permanent berth is the newest terminal in the Pacific Northwest and is built to accommodate the largest vessels on the West Coast of the Americas proven with calls in 2014 by the Celebrity Solstice and RCL’s Explorer of the Sea in 2016. Fast disembarkation, golf cart shuttles and complete handicap accessibility allow passengers the freedom to come and go quickly to awaiting tour buses for the Central Vancouver Island Region and City Shuttles after clearing customs in the Welcome Centre when required. 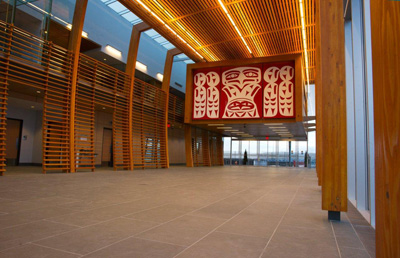 Packing for your cruise stop here just got easier thanks to Nanaimo having one of the mildest year round climate regions in all of Canada. Summer begins in June and often extends into October with average daytime highs in the mid-20s Celsius (70s Fahrenheit) with lows of about 10C (50F).

The city of 87,000 residents has a small town feel and locals encourage passengers to come ashore and experience “a little island time.” Ambassadors stationed in the Welcome Centre and at many shuttle stops along the way, love to share their secret hot spots such as: the Dinghy Dock Pub, where to find the best Nanaimo Bar, Newcastle Island Marine Park, the shops of City Quarter, Horne Lake Caves, wine tasting locations, the Harbourfront walkway, the Arts district, and the never to be missed -daily cannon firing and bagpipes at the Bastion!

Restaurateurs & bistro owners take full advantage of the abundance of boat-fresh seafood and farm-fresh produce as evidenced by the 100 mile diet items being featured on most menus. Nearby farms also welcome guests and offer a variety of fare from organic edibles, to honey and herbs, to bison.