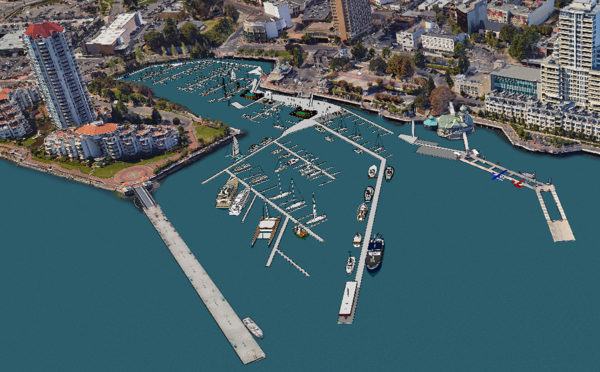 Nov 22, 2018
NANAIMO – Design plans have been completed for the Port of Nanaimo’s new downtown boat basin marina that will increase available moorage by 50 per cent, using the same footprint.

A request for funding has been provided to the federal government for the $15 million project, and once the funding is in place, construction will follow. The marina will be built in phases over a five-year period, beginning with the outside northerly floats.

After a plan was announced several years ago to have a private company revamp the marina, the public outcry against it was deafening. “The Port got the message loud and clear that citizens wanted to have their say about what our downtown waterfront might look like,” says Port of Nanaimo Chair Michelle Corfield, who was re-appointed by the City of Nanaimo to the Port Board this week. “We haven’t rushed the information gathering process, and we’ve really gone the extra mile to make sure everyone who may be affected had a chance to provide their input.”

Co-CEO Ian Marr adds “Other users that were included in the design review process were Protection and Newcastle Island ferry operators, long-term pleasure boaters, transient boaters, the Nanaimo Dragon Boat, Adventure Outfitters, operators of SuperYacht, kayak users, Canada Border Security and the RCMP Marine Division,” he states. “We also considered residents and visitors access from the Harbourside Walkway. Marinas are assets for the community and attract people from both the water and the land.”

Hugh Tuttle and Kristin Tuttle of InterTidal Design have prepared the concept plans for the marina, and an environmental assessment – along with bathymetry and subsurface investigations – which are nearly completed. This will allow the Port to commence with detailed construction plans.

Port Vice Chair Donna Hais adds, “Plans also include the repositioning of the fuel dock out to the entrance of the marina, which will provide improved access for larger vessels and reduce vessel congestion.”

Letters of support for the Port of Nanaimo’s funding application have been received from Members of Parliament, provincial MLA’s, Harbour Air, Vancouver Island University, Tourism Vancouver Island, floating restaurants in the harbour, and Protection Island residents