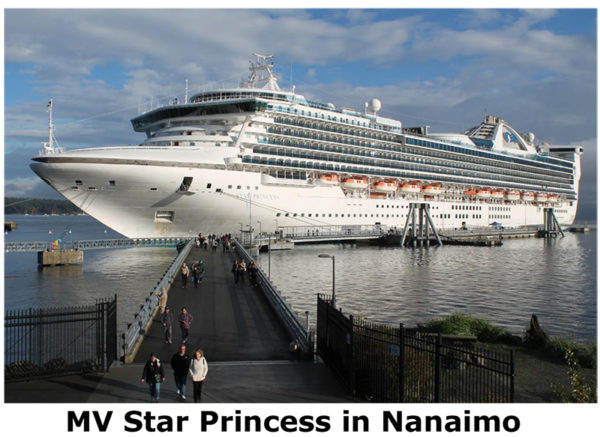 She is a Grand-class cruise ship owned and operated by Princess Cruise Lines, 290 metres in length with a beam of 36 metres, a passenger capacity of 3100 and 1250 crew. She begins this cruise on October 18th in Vancouver, cruising to Nanaimo and on to Seattle with Los Angeles as its’ final destination, completing a 7-night Pacific Wine Country itinerary including stops in Astoria and San Francisco. The Star Princess called last year on the Port of Nanaimo on October 20th, 2016.

Ewan Moir, President & CEO of the Nanaimo Port Authority, considers the call by the Star Princess as an economic boost for Central Vancouver Island. Ewan states: “Nanaimo is a gateway to one of the most preferred destinations in the world and once discovered we believe that many passengers will return. The Star Princess’ arrival in late October is a great lift for Central Vancouver Island communities, a significant benefit from passengers discovering this destination for the first time.”

Ewan comments further: “Princess Cruise Lines’ calls on the Port of Nanaimo provide benefits to the Alberni and Cowichan Valleys including the Parksville – Qualicum area from local & regional shore excursions.” As passengers arrive in the cruise ship terminal, Tourism Nanaimo Travel Counsellors greet passengers and point the way to photo opportunities with the RCMP in Red Serge, the ‘Big Tub’ and displays of racing tubs from the Loyal Nanaimo Bathtub Society. Cannon Firings at our historic Bastion are scheduled for 11AM, noon, and 1PM. Nanaimo Bar samplings are always part of our renowned hospitality, a favoured treat when visiting Nanaimo.

Passengers also take in the popular harbourside walkway, the Pioneer Waterfront Plaza and our interesting museums. Complimentary shuttles transport passengers from the cruise ship terminal through downtown Nanaimo where they engage with Nanaimo Ambassadors. Contact with local culture include the downtown area, galleries, eateries and walking tours which receive positive passenger feedback on a consistent basis.

Ewan continues: “We work hard with our city and regional partners to provide a high level of service on a consistent basis, amenities that complement our award-winning cruise facility and programs that cruise lines can count on. Passengers tell us that we have an exceptional product and they want to see more of Central Vancouver Island.”

See pictures and video from cruise visits in Nanaimo at cruise.npa.ca